My 10 bicycle observations in Amsterdam

Riding a bicycle in Amsterdam often feels like an amusement park ride. The best part of it is admission is free. Contrasting my experiences of living in Toronto, here are 10 bicycle observations from my first year of rolling in the bike lane.

There are more bikes than people in Amsterdam. In a city with a population of just over 800,000, the average resident owns 1.5 bikes.

With over 60% of trips made by bike within the city core, rolling wheels can give the impression of blood pumping through a giant organism. But when they’re not moving, the impression can feel quite different.

While there are plenty of parking solutions, at times it can be difficult to find a spot at a train station or on a street in the suburbs. 15% of all bikes parked outside aren’t being used, while 60% of all unused bicycles are found in the inner city. Any way you look at it, there’s just a lot of bikes. 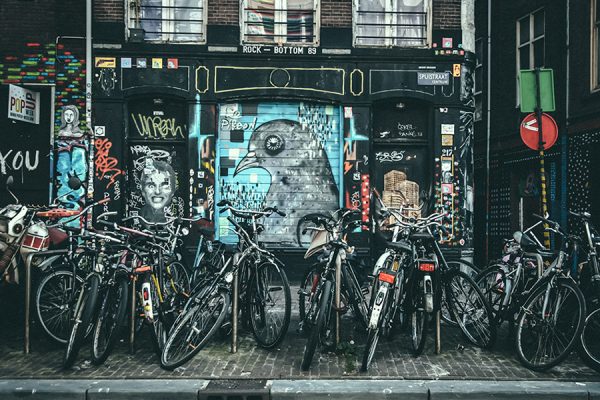 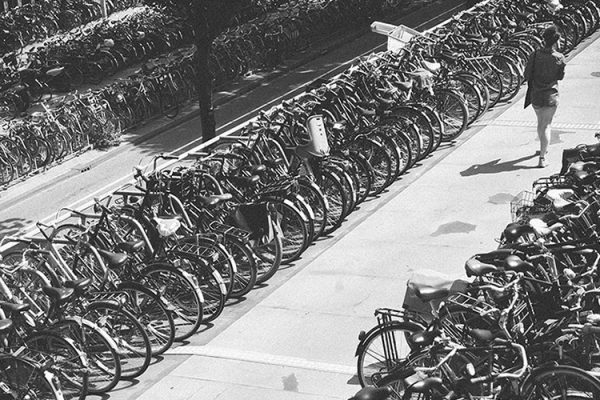 2. The types of bicycles people ride

Expect to a see a full spectrum of bicycles in this bicycle mecca. There are plenty of 3-speeds, 7-speeds, bikes with derailleurs, folding bikes, cargo bikes, fixies and toss in some homemade innovation for good measure.

However, loop frame single-speeds with coaster brakes dominate the bike paths in Amsterdam. Many of the traditional Dutch single speeds date back thirty to forty years. Majority of the them cruising around town resemble a spinning toy top before it topples in a violent last thrash. Gyrating fenders, wobbling wheels and busted tail lights are typical trademarks.

Everyday the ear is introduced to a new chorus of pings, knocks and grinds. Regardless of any shortcomings, if the bike can roll, locals will ride it. 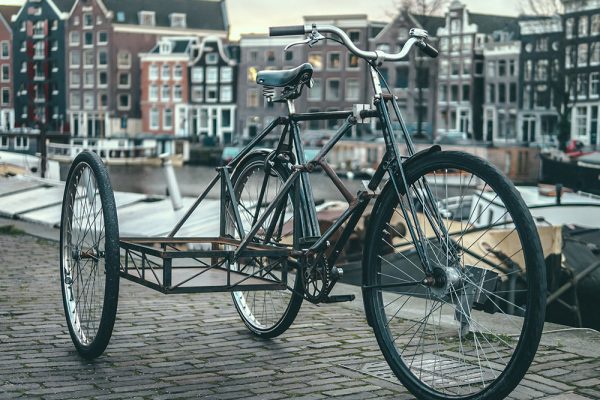 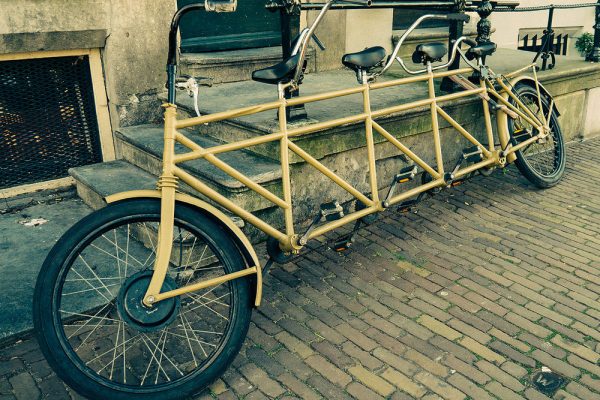 3. No one wears helmets

For many first-timers to the city, this observation could be the most obvious. Nobody wears a helmet while riding a bike.

That’s not to say that you won’t see them. They’re about as common as spotting a vintage Volkswagen punch buggy. Less than 1% of bicyclists in Amsterdam wear a helmet.

So who makes up this minuscule number? Excluding those who ride for sport, cross-country trekkers and tourists, this group  mainly consists of phobic expats. 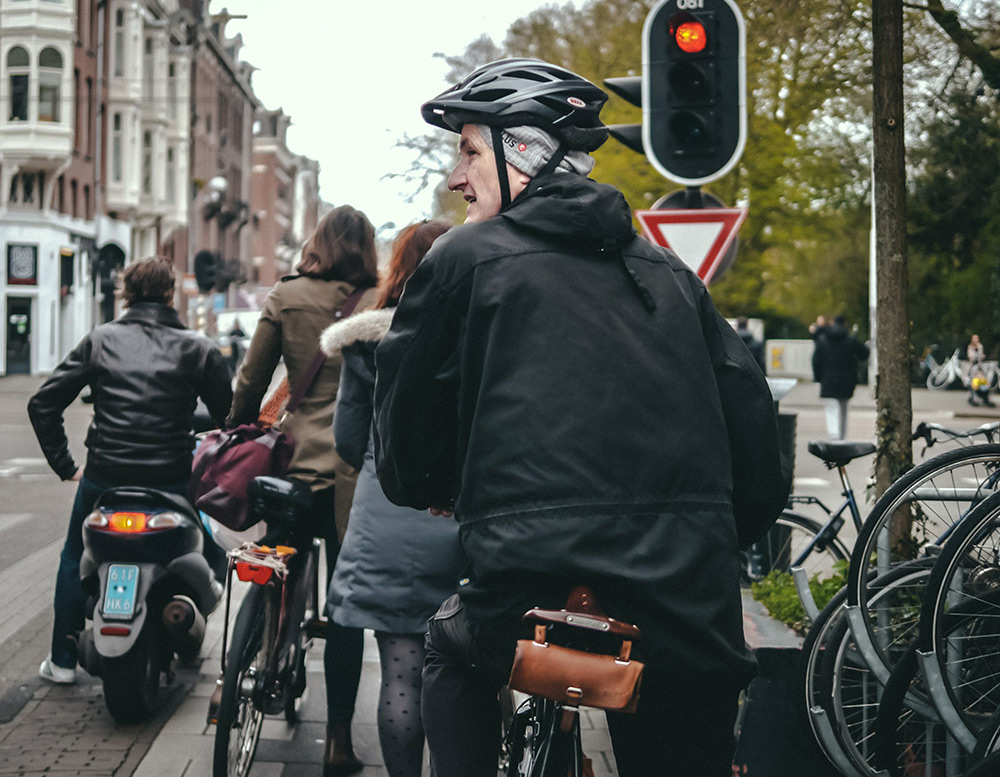 One of the best experiences of exploring Amsterdam is what I call the “Dorothy Effect.” Discovering a separated bike lane in an uncharted part of the city feels like finding the Yellow Brick Road in the Wizard of Oz. Pure riding bliss.

The sheer variety of bike paths lends credence that there is no rubber stamp solution to moving people. There is certainly a remarkable level of ingenuity involved in the urban planning that makes Amsterdam one of the best bicycle friendly cities on the planet. 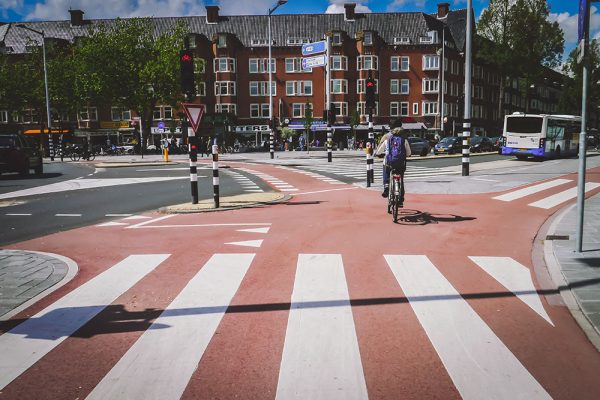 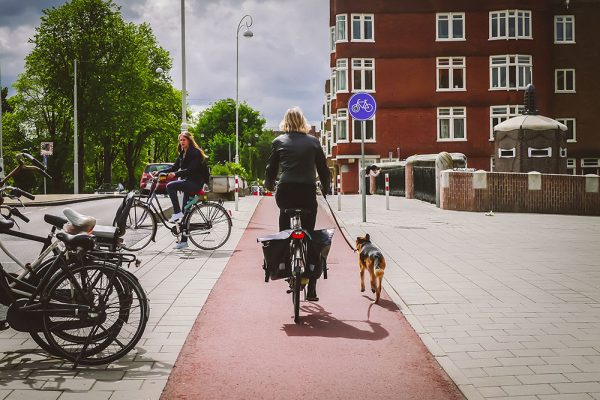 My initial thought was that car drivers in Amsterdam have a sixth-sense. How else do they avoid all these bikes?

Separated lanes for bikes and cars plays a significant role in avoiding one another. However, this isn’t always the case. There are plenty of instances where cars and bikes squeeze together to share the streets. But all without incident.

Motorists appear to have far less angst towards bicycles compared to those in Toronto. They don’t take liberties and there is no us-against-you mentality. 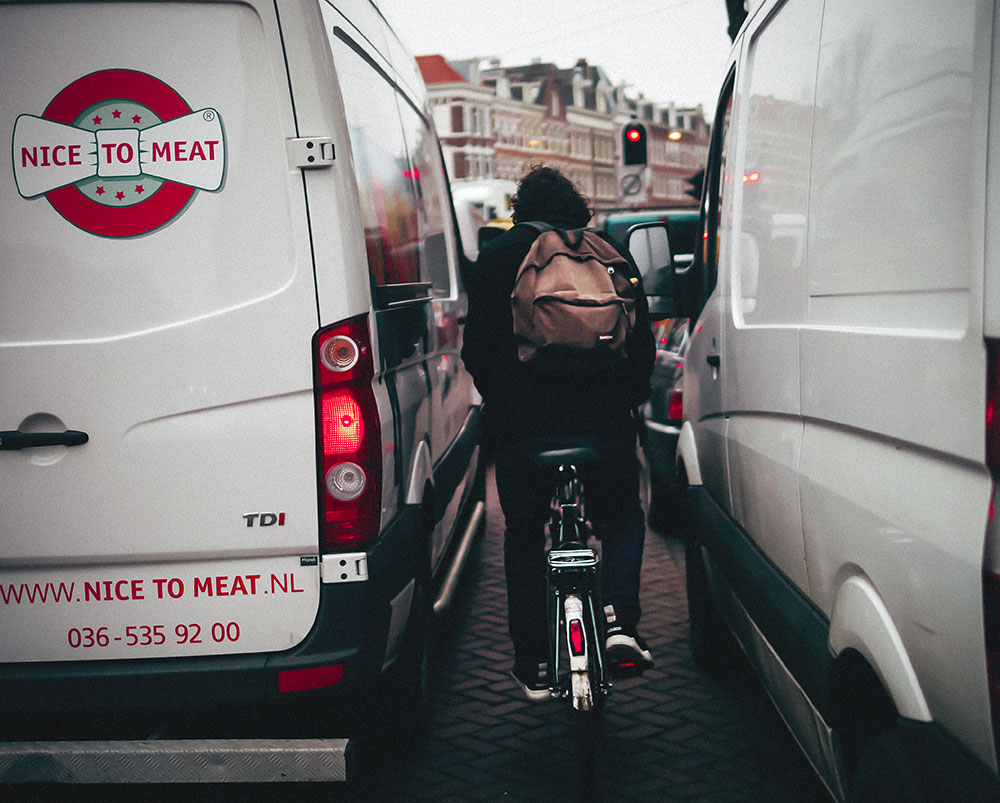 All bikes in Amsterdam have wheel locks. What makes them special is that you don’t have to lock your bike to anything. Just pull out they key and your back wheel is locked.

Of course this won’t prevent someone from lifting up the bike and walking away with it. But it’s enough of a deterrent if you just want to pick up a few groceries or pop into a shop. 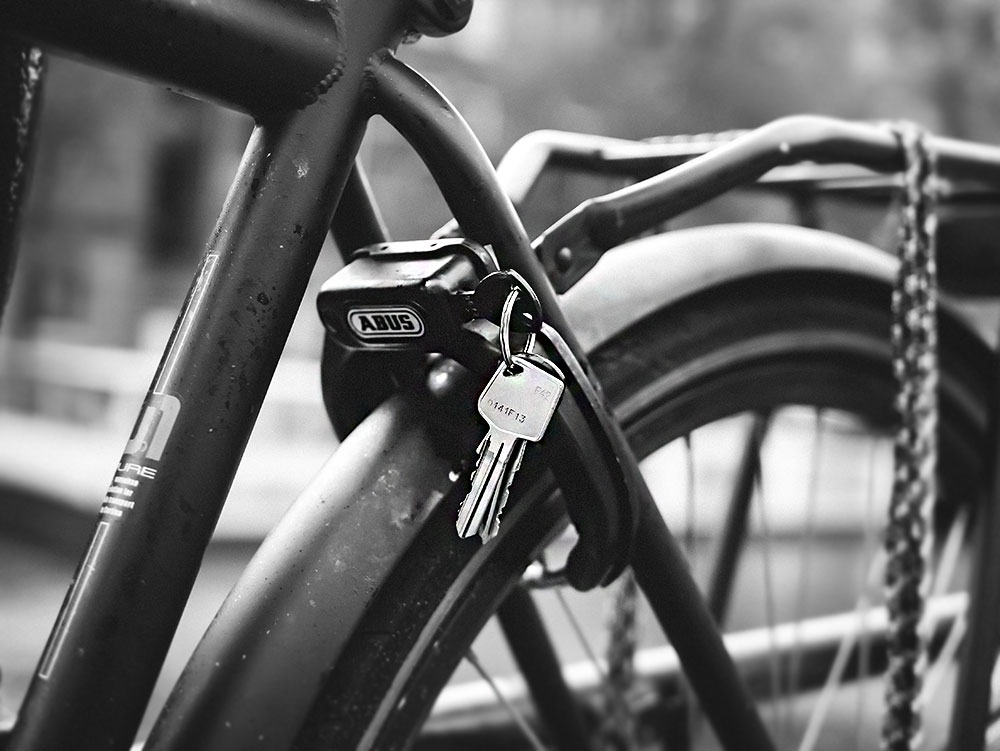 Sometimes red lights appear to be only a suggestion.

Everyday there are bicyclists who go through stop lights and right into oncoming traffic like a hot knife cutting into butter. Forget about Frogger, there is no pausing. It’s all done with such fluid execution that you realize that they must have done it before.

While it’s clearly against the law, it’s just so common that no one will lift a brow when someone does it. 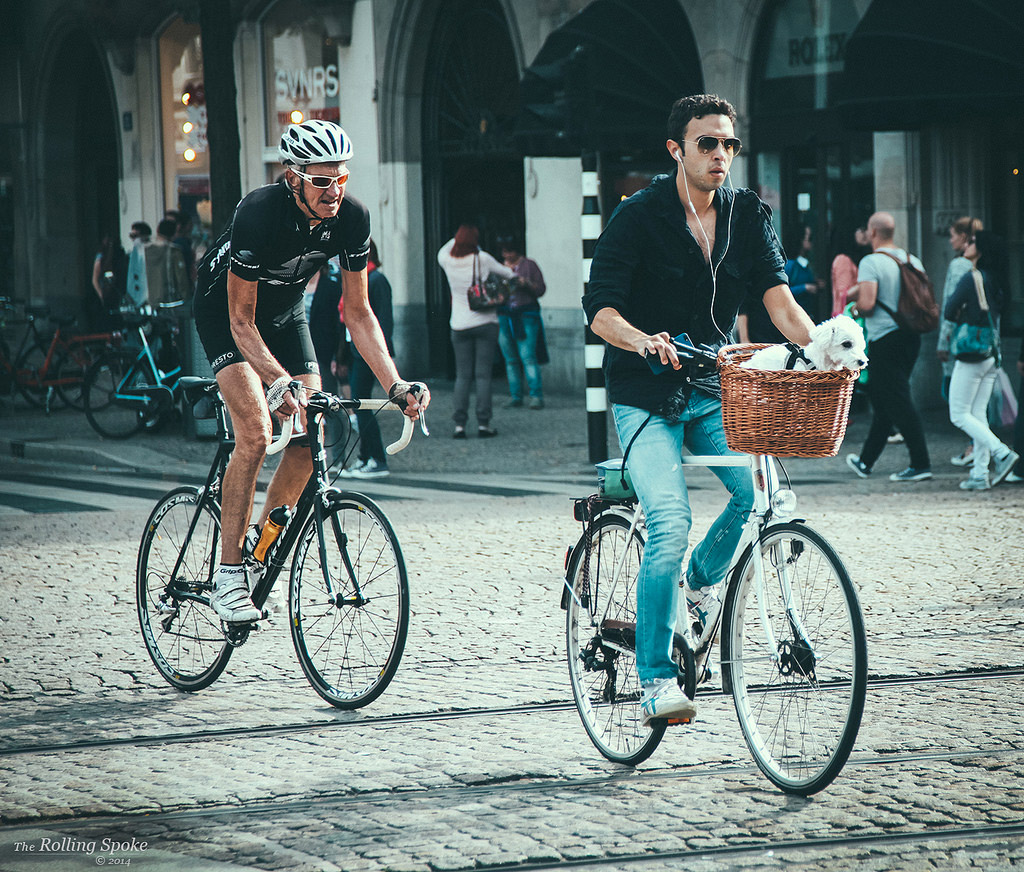 Amsterdam has a reputation of having a progressive attitude that routinely practices social tolerance. Does this pragmatic approach resonate to the bike lanes? You bet!

No one will chirp at you to slap on a helmet, make suggestions to remove your earbuds, snicker at how you carry something or shake their head in disbelief because your bike light doesn’t work.

Essentially there is no carefully articulated criticism of what you’re doing as being irresponsible or stupid. 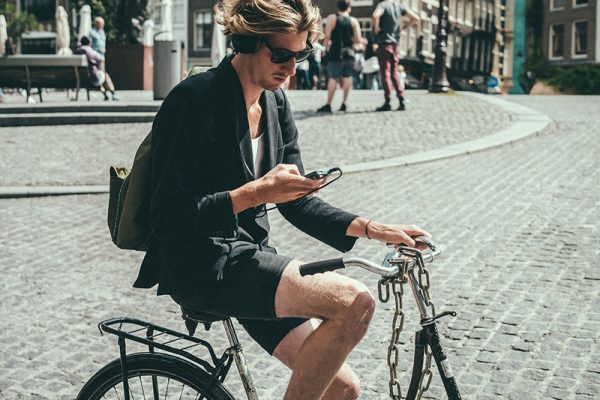 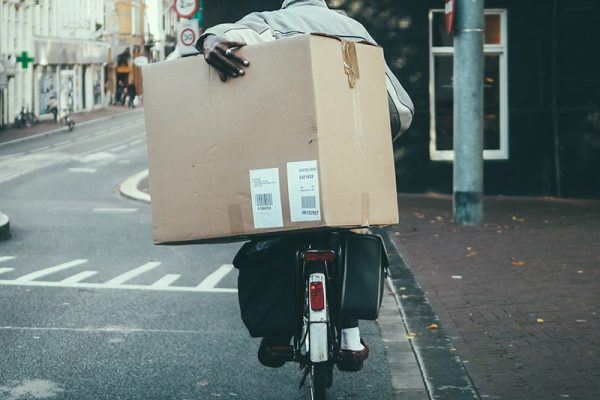 9.  The Dutch are cold-blooded

Having lived my entire life in Canada, I’m well versed on frigid temperatures. I know if my thighs can’t keep my testicles warm, then my extremities have long returned to the ice age.

Riding a bike at zero degrees (0 °C) on the celsius scale is pretty rough to say the least. I found myself to be far more prepared than other locals that I just had to do a census. I counted 500 bicyclists on what they wore when temperatures hit zero. 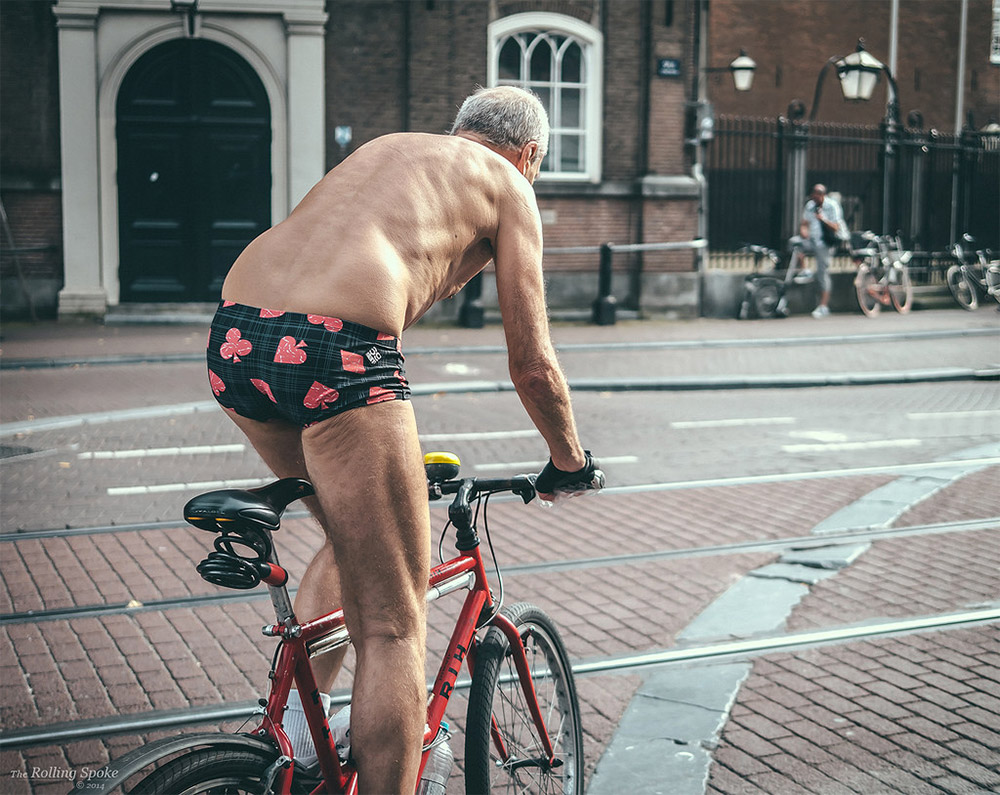 When it comes to riding together, all conventional wisdom is tossed into the canal.

Families will plunk their kids inside cargo bikes, strap them to child seats or perform what could be described as a circus act and carry them in any way feasible.

Most bikes pathallow space for two while the left side is used for passing, but friends and couples will often ride side by side with remarkable synchronicity, even as they encounter bends and turns.

There is definitely a social aspect when it comes to riding a bike in Amsterdam, which is something that is often in contrast to other cycling communities. 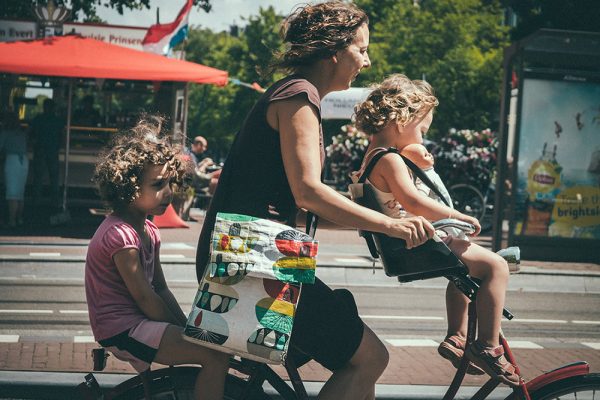 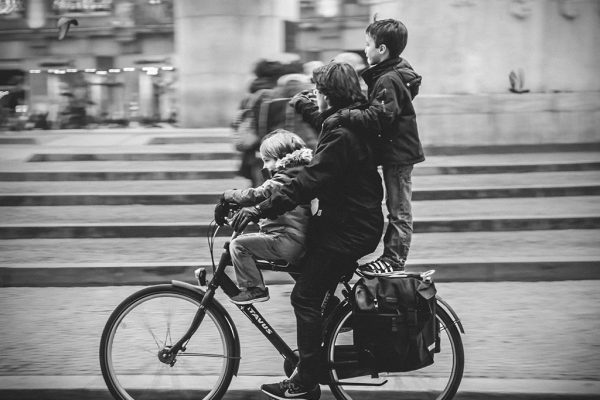 Riding a bike in Amsterdam can be a very different experience for most. Often new visitors to the city can pick up on cues and see things that beyond the norm for locals. If you’ve been to Amsterdam, what are some of your bicycle observations? Feel free to share in the comments below.