Review of the Knaap Bike

By GusSeptember 16, 2022November 24th, 2022No Comments8 min read
The Knaap bike is a Dutch e-bike brand that took Amsterdam by storm in early 2020. Their aim is to be a industry leader in both spec and style. There is little to argue against it being a revolutionary ride that stands out from the crowd. But is it worth the hype? My review of the Knaap bike looks to answer this question. 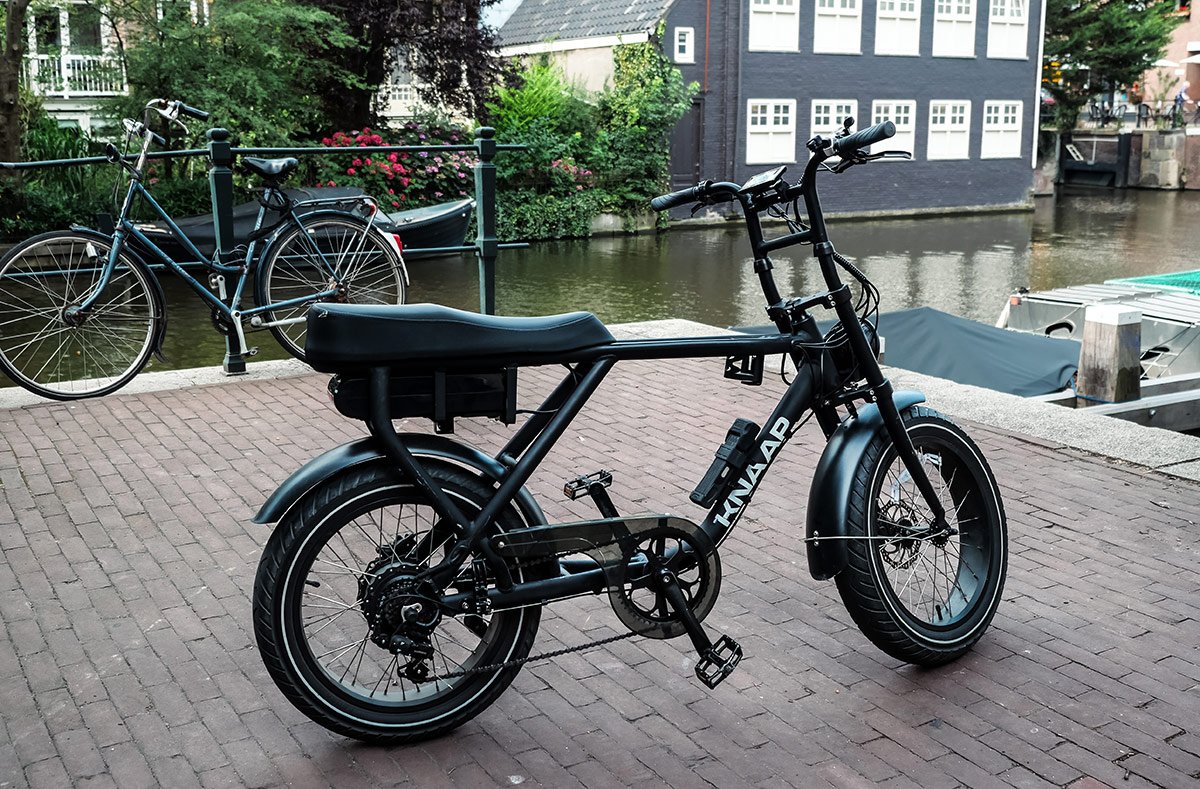 A new breed of E-bike

Electric bikes have been outselling traditional bicycles in the Netherlands since 2019. This was heavily influenced by the fat-bike craze lead by Knaap alongside its cousin Brute, Rad Power Bikes, Doppio and Super73.  What makes these e-bikes unique besides their obvious style, is that there has been nothing like it before. Low-riding fat bikes would simply not exist if they weren’t electric.
Typically, e-bikes were basically standard bicycles with a battery slapped on with an integrated motor. But a new breed was born thanks to some innovation and pioneering. Suffice to say, fat e-bikes have firmly entrenched themselves as a trendsetter in the Amsterdam bicycle landscape.

The word Knaap in Dutch translates to boy or lad. One could argue that Knaap bikes are geared towards the young and hip. While I am neither of those, I’m certainly impressionable and was itching to give one a spin. What also appealed to me was the long seat base, making it suitable for two adult passengers.
The extended seats on fat-bikes is a real game-changer. Two passengers riding on one bike is nothing new in Amsterdam. But having someone propped up on a comfort saddle instead of dragging their feet from a back rack makes a huge difference. This appeals to a wider base and it’s no surprise to see people often “dinking” on the Knaap. 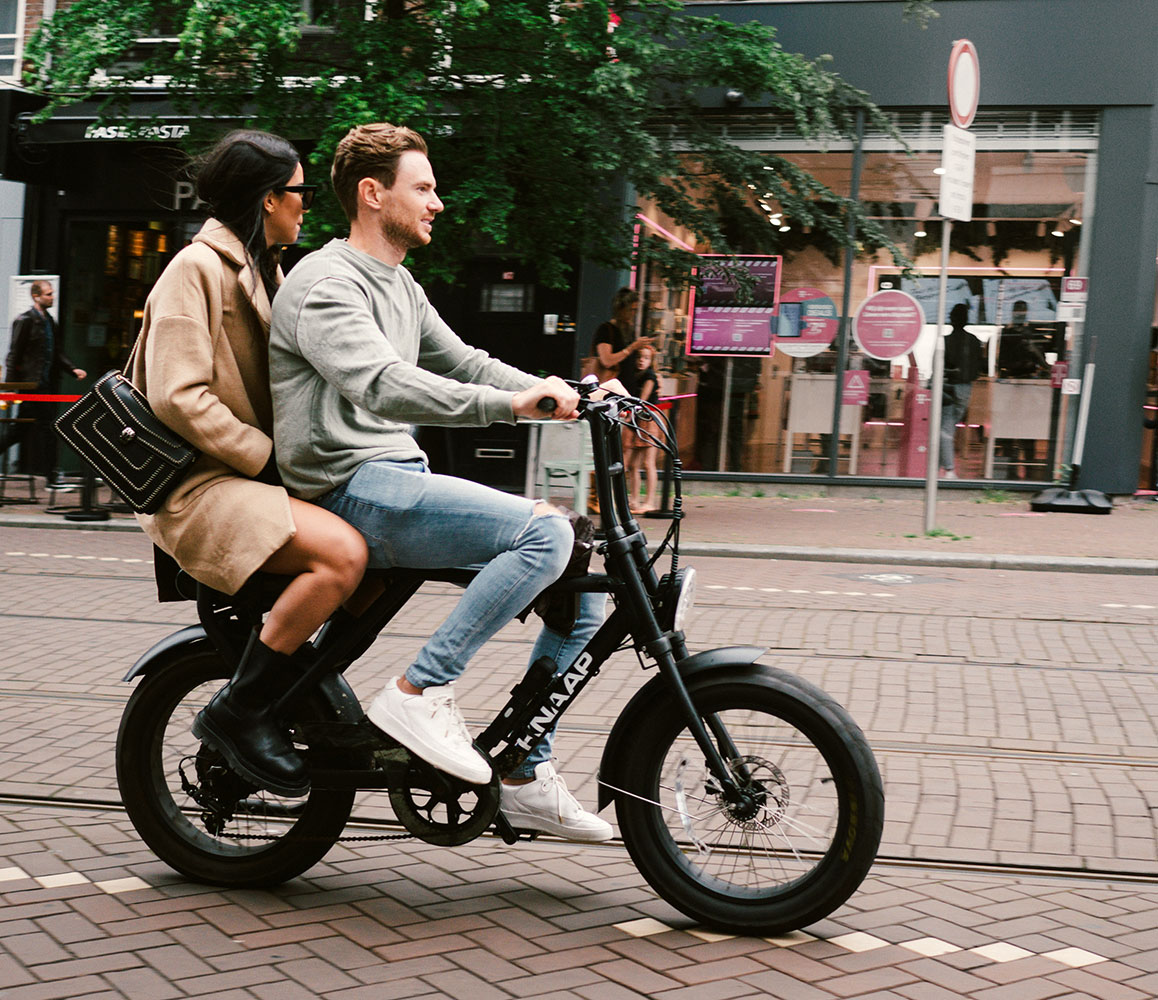 The Specs of the Knaap

The frame is made from aluminum with a maximum load of 150 kg and is available in space grey or black. All models come with foldable footrests mounted on the frame and fenders. There is also a handy cup holder.
Depending on the power assist level, you can drive up to 140 km (position 1). In power setting 5 (highest gear) you can drive up to 60 km per charge. The battery charge time is 4-6 hours.
There are two models available but the specs are nearly identical. The upgraded RTD version comes equipped with a front fork and frame suspension along with a few minor aesthetic changes.

I have a relationship with A-bikes, a bicycle rental company in Amsterdam which carries the Knaap among its electric fleet. I’ve been able to take them out for spins and fortunately avoid any impulsive purchase. 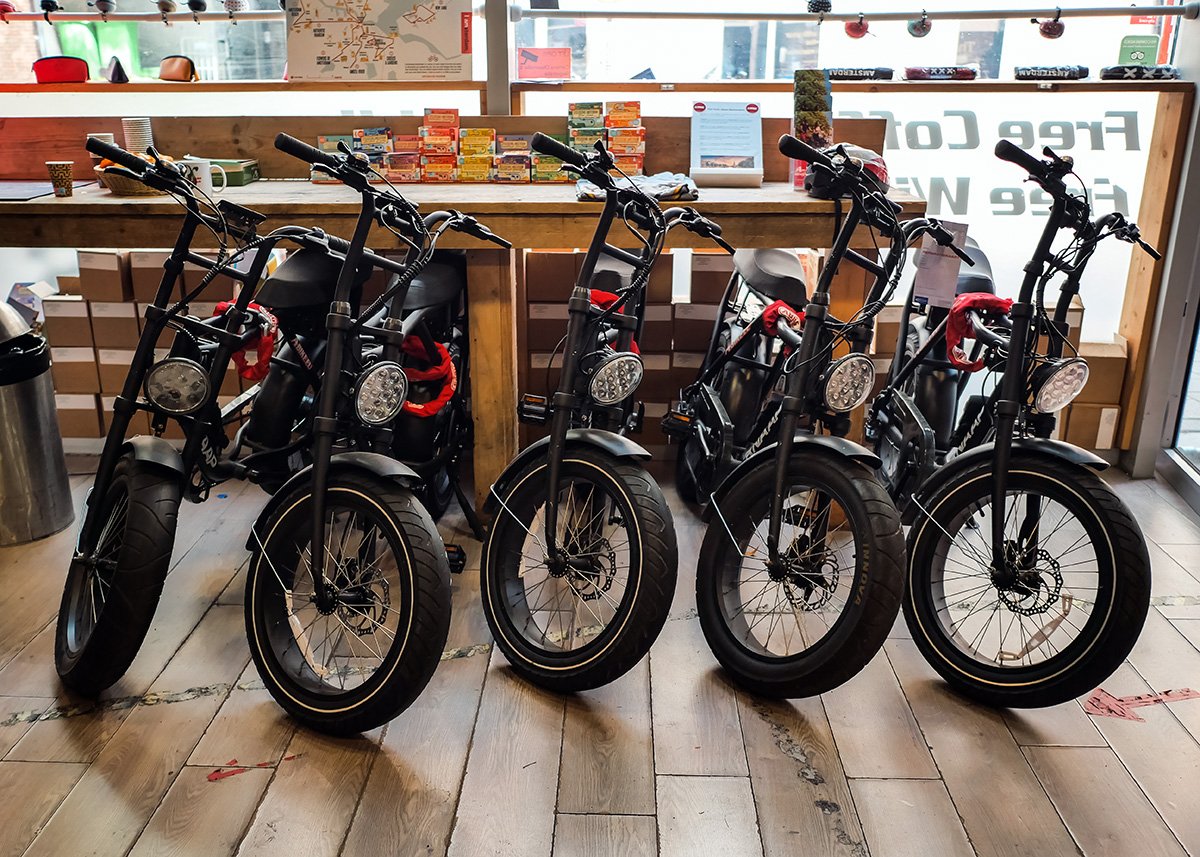 My first impression of sitting on the standard AMS model is that it doesn’t feel like a bicycle but whole different kind of beast. The high handlebar position creates an engaging ride. The bike has an overall semi-premium feel with rubber ergonomic grips and a decent finish on the aluminum frame.
The saddle was a pleasure to sit on and is advertised as scratch resistant. Though this didn’t prevent a tear forming on my particular model. I was comfortable and content with the positioning. But I wondered how the typically tall Dutch might respond. However there is a 5 or 10 cm seat booster available for €110. 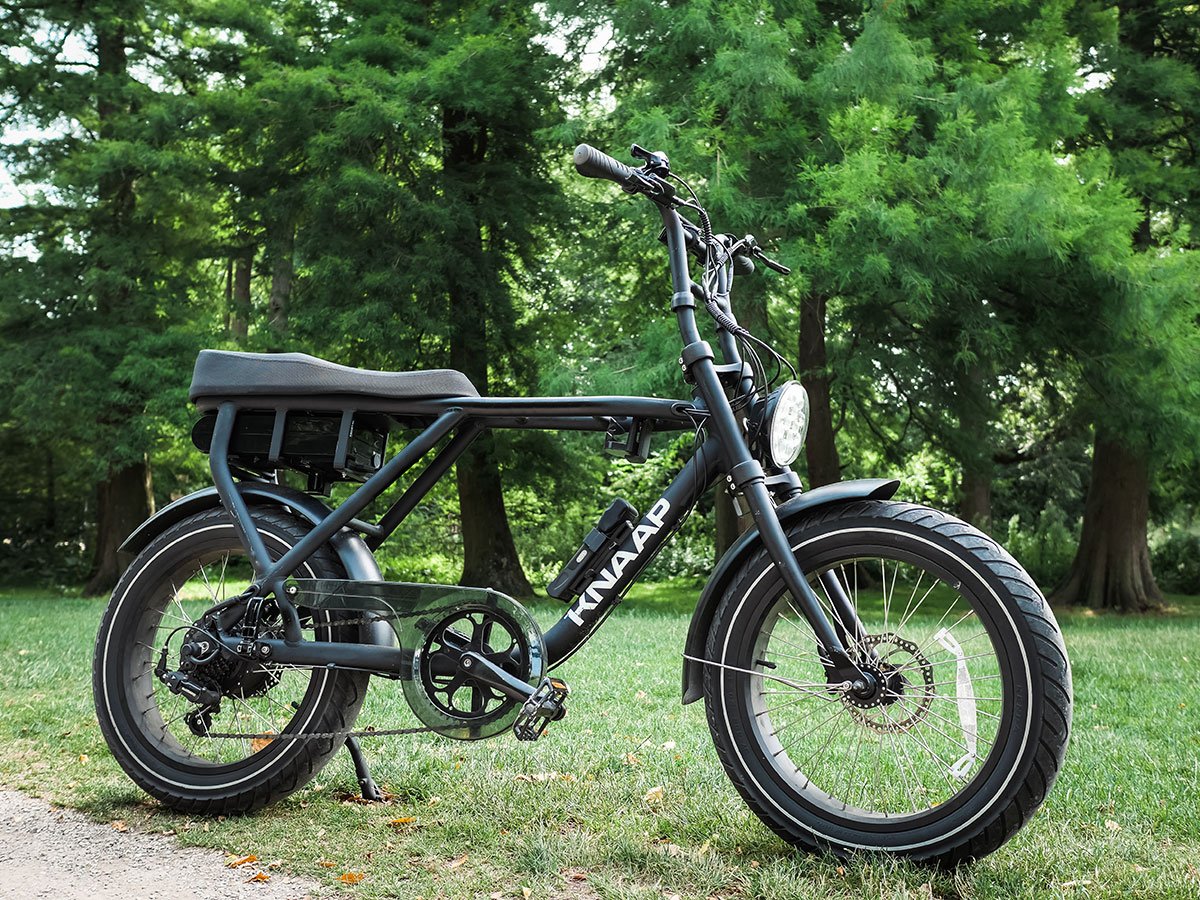 The LCD display with illumination is large and clear. The buttons for the power assist are well positioned and easy to use. I love the powerful LED headlight which really should be a standard accessory on all fat-bikes.
One minor gripe is that the chain guard only confirms how much I hate plastic on bikes. It looked ugly and just felt like a third-party knockoff and I would be inclined to tear it off if I owned the bike. 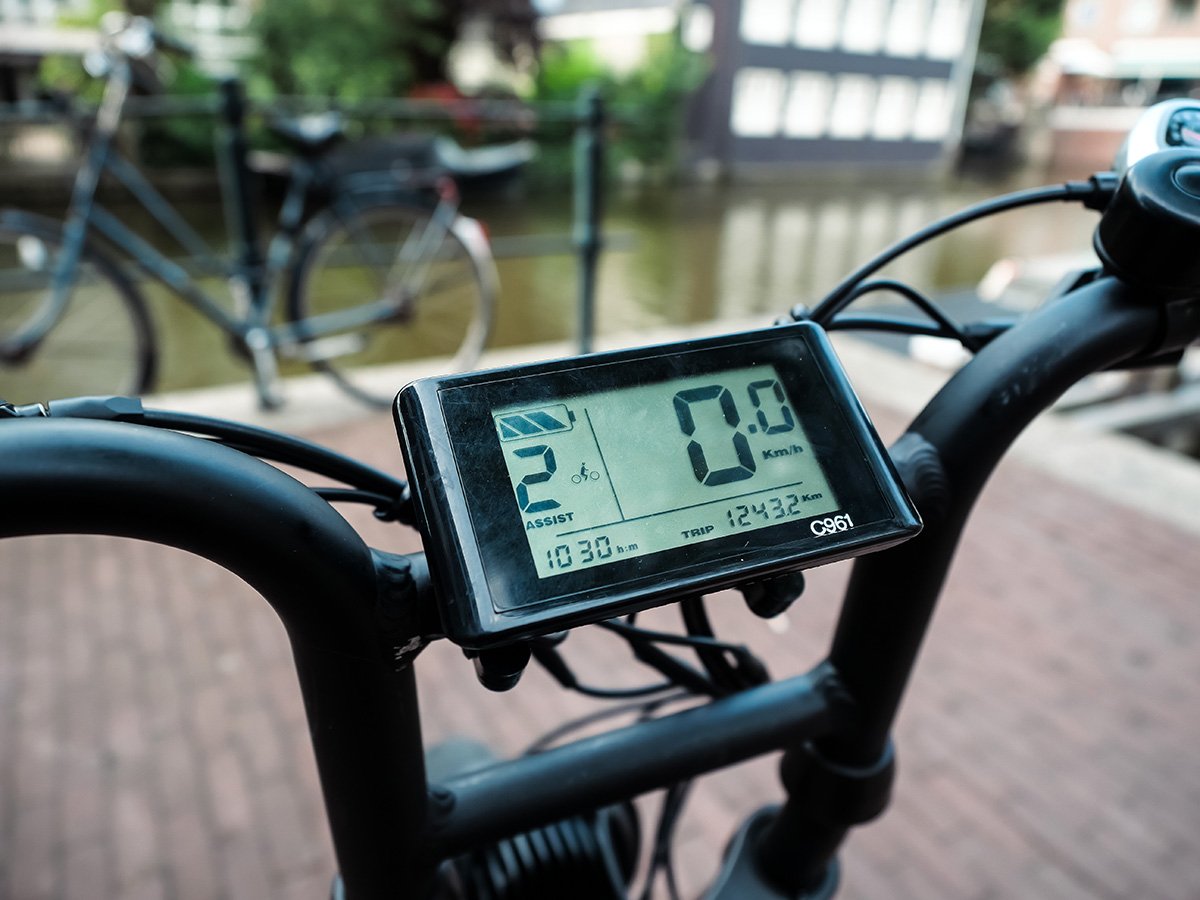 I headed straight for the canals from the bike shop. The initial weirdness of the low center of gravity accompanied by the heaviness faded once the electric motor kicked in.
The 20” fat wheels  gobbled up the cobbled roads and was very forgiving rolling over any raised margins on the edge of paths. Vibration was kept to a minimum and only became more noticeable with the chain lock wrapped around the frame. An Abus folding lock would seem more suitable though I wondered how the bike might ride with a suspension system in the upgraded RTD model. 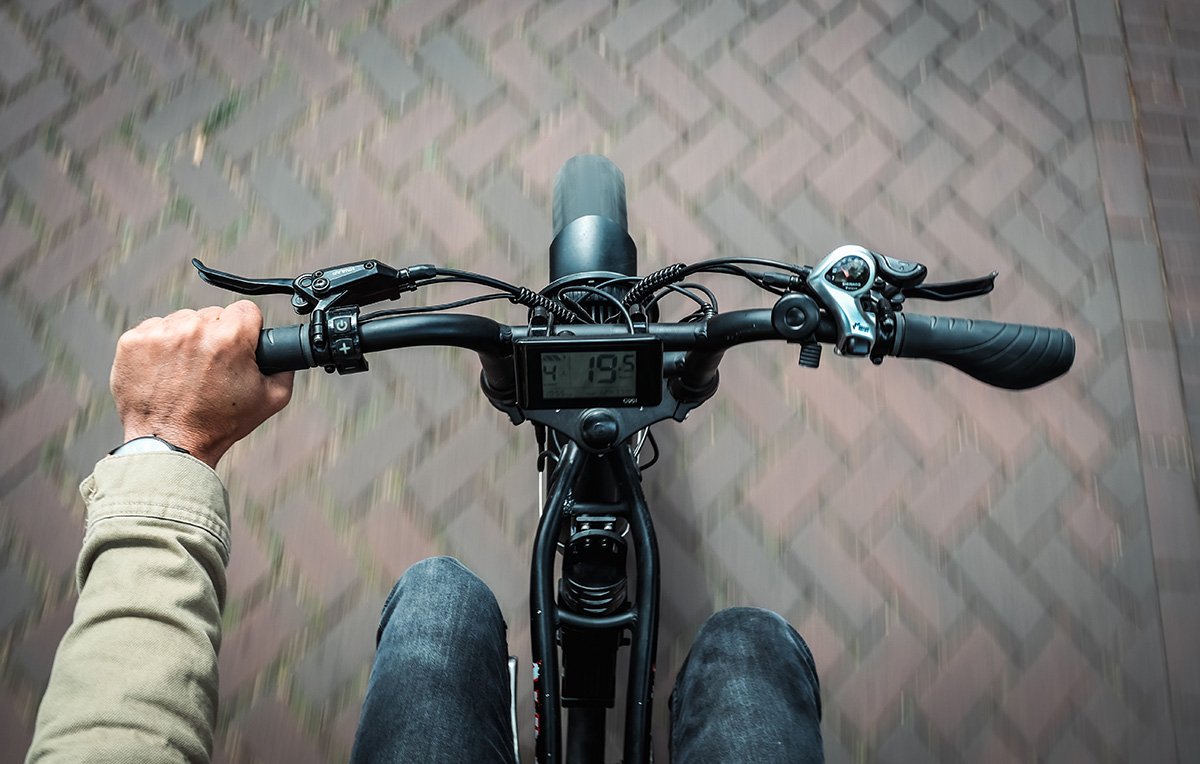 I found it to be a minor challenge to find the sweet spot between using the gears with the power assist system in stop-and-go traffic. After awhile, I preferred to leave it in the highest power assist setting. The Shimano SiS thumb shifter worked well but felt a bit clunky for my taste. The bell also left a lot to be desired as it was just a run-of-the-mill bell you can buy at one of the markets for €2. 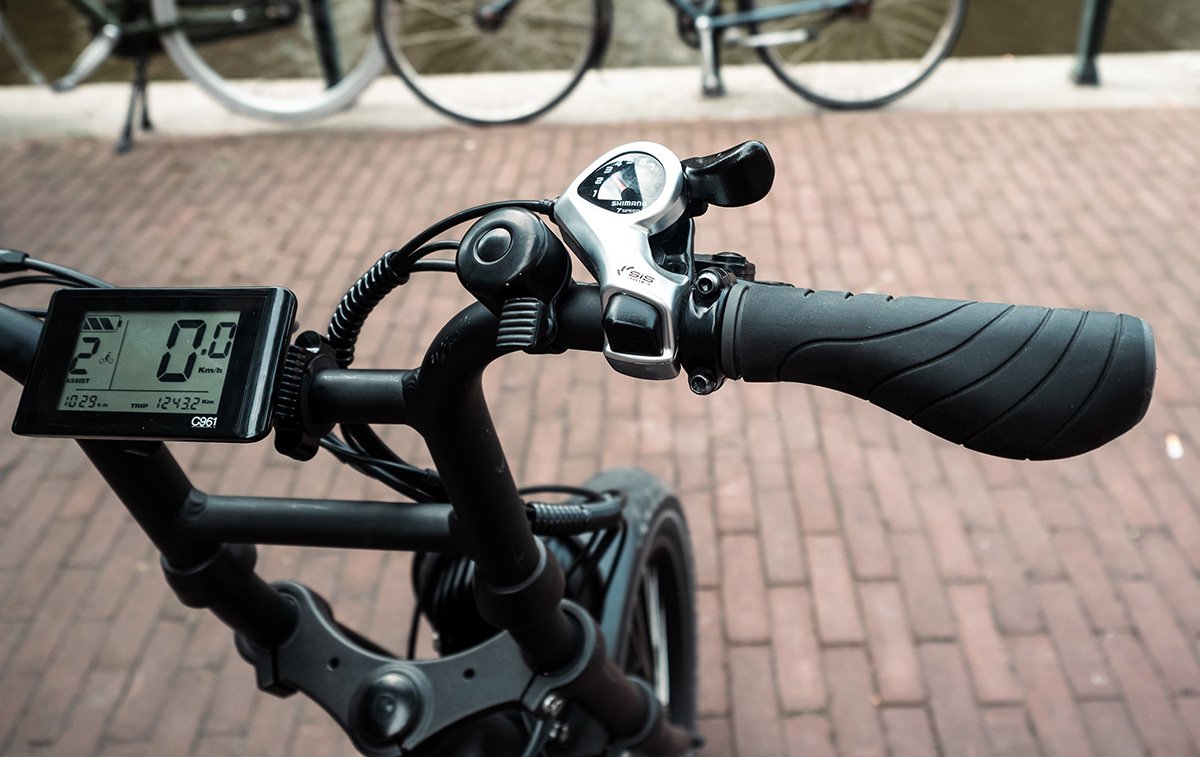 I often feel the need to go faster than 25 km/h on an electric bike but the riding dynamics of the Knaap felt suited to the max speed in Amsterdam traffic. Nonetheless I relished the feeling of chewing up any urban terrain. Overall I found it to be  a comfortable and complaint cycling experience, and simply fun to ride.

Are there any drawbacks?

Among the most obvious drawbacks with an electric bike is what happens when the battery fails or runs out of juice? Disruptions in supply chains lingering from Covid means you could be waiting a few months before getting a new battery.
You could get away with riding a standard e-bike without battery power for a short distance. But the Knaap is a heavy bike and a real chore to pedal with its low positioning without any power. Turning is a bitch with the fat wheels. The truth is that you won’t be going anywhere if the battery fails.
While battery failure is not that common, there are some other glaring issues. Upon closer inspection, I got the impression the bike was constructed with electric components slapped on without much oversight. This is particularly noticeable with the cable that runs into the battery. People who have rented the bike sometimes wrap the chain around the down tube which can disrupt the connection. I can’t help but think this is a design flaw. 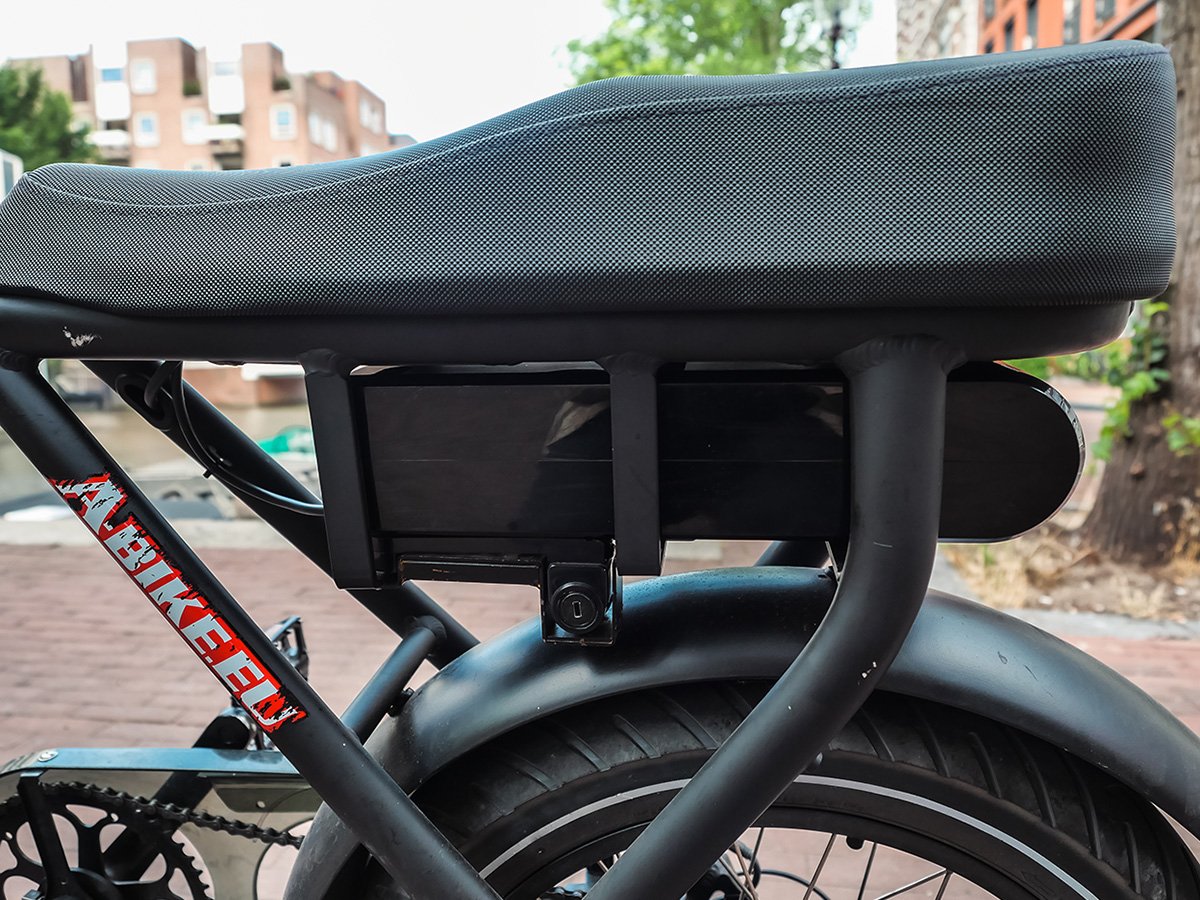 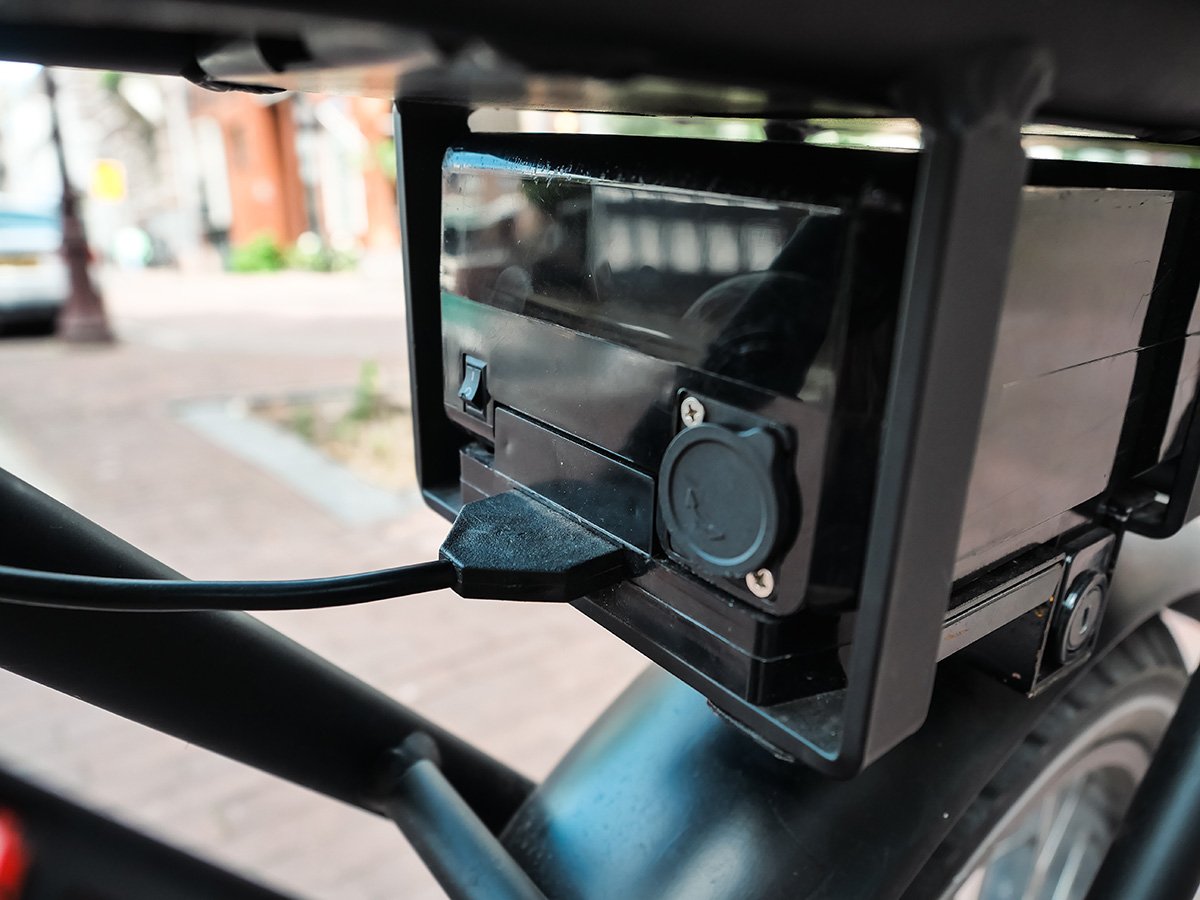 I discovered some pressing concerns after glancing over some work orders and speaking to the bike mechanic in the shop. For one, the power assist can be knocked out of commission if any of the sensors are disrupted and there are several instances where this can happen. There is a sensor behind the chain ring which oddly enough can be adjusted by a thumb push (or misaligned just as easily.) There is also a sensor in the left handbrake which more commonly can be disconnected after aggressive breaking. 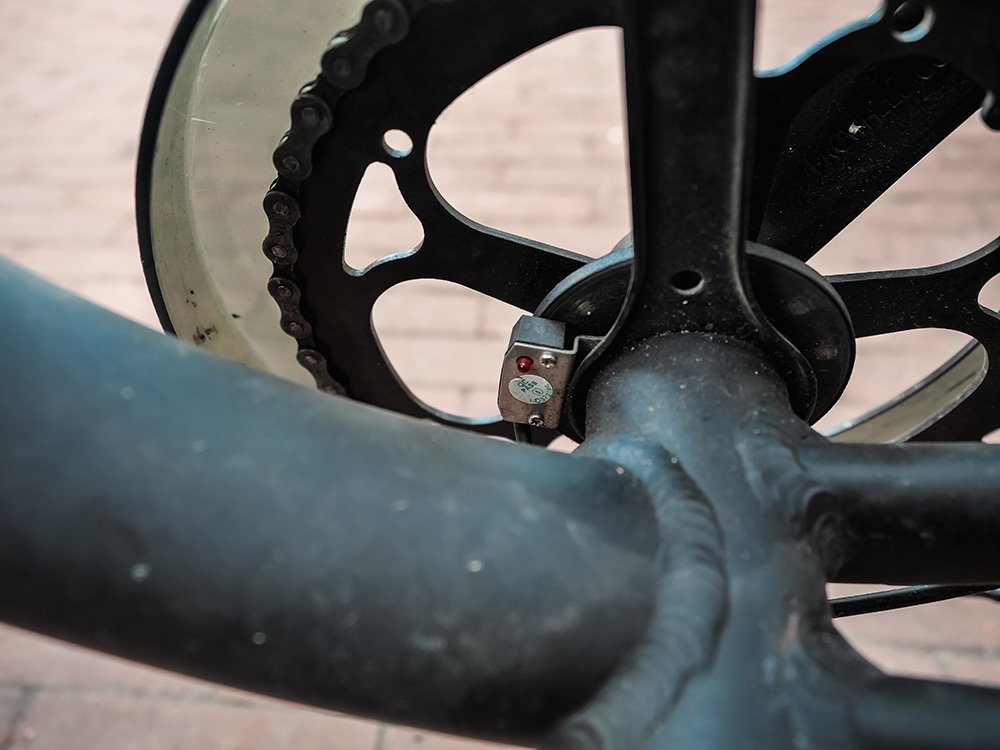 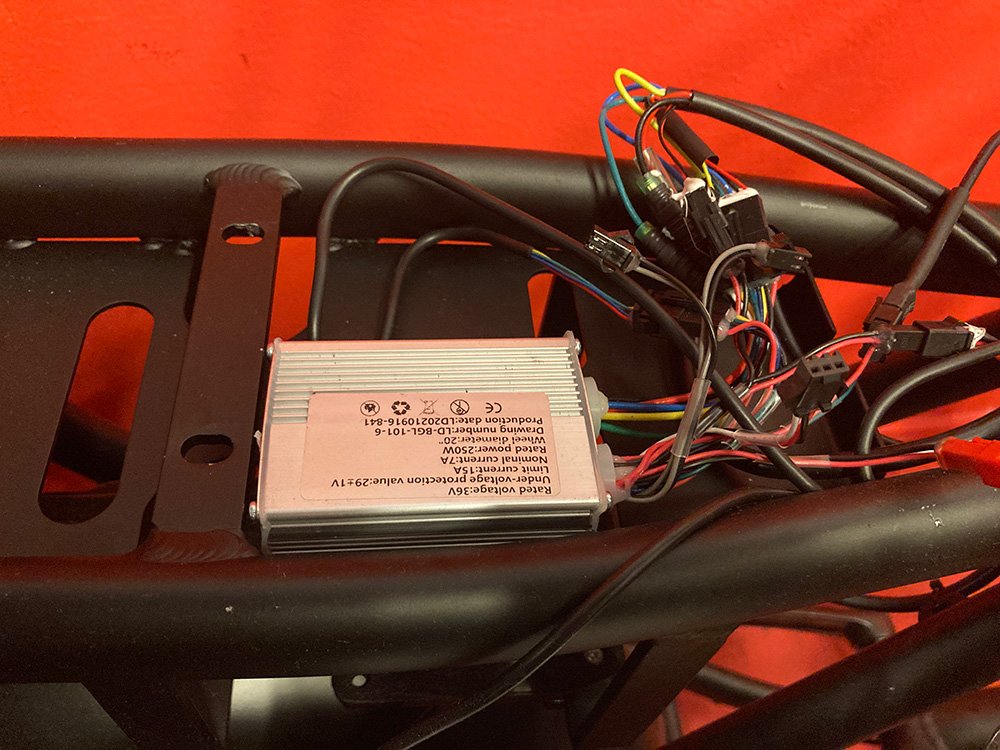 The final instance where this can happen is under the saddle where the module is located. One has to follow a sequence of tests to see where the fault is so there is never a certainty on where the problem lies. If it’s not sensor issue, then a diagnostic test will need to be run on the module. These problems are not uncommon with e-bikes, but they do come up often enough with Knaap bikes that it makes our mechanic cringe whenever the bike rolls in for repair.

Some things to consider

One thing that is often overlooked when getting a bicycle is where it will be kept. If left outside, bikes are battered by the elements. The Dutch environment guarantees rain, which is never good for a bike with a cog because that will be among the first components that will rust. When it’s not raining, it gets baked by the sun, covered in honeydew excretion and bird shit.
Squeeze a bike into a bike rack, leave it there for a week and see what happens. Bikes are abused when they are parked, not while they are ridden. However the Knaap won’t fit into a standard Dutch bike rack either. So where can you safely lock it up?
An e-bike is supposed to make your life easier and not complicate it. These are things that should not be dismissed, especially after making a €2500 investment.

While I would love to have an e-bike in my arsenal, I would likely pass on the Knaap. I’m hesitant on getting anything 1st or 2nd generation until the kinks are worked out. Unfortunately the Knaap has a few too many. I do my own repairs and maintenance and having to wait for components or running diagnostics would test my patience.
However that’s not to say that it doesn’t have a lot going for it. It’s stylish and a blast to ride. I can’t help but feel a little swagger blitzing down the streets on the Knaap. It’s well suited for the urban environment and the two passenger option on an extended saddle is a huge bonus. 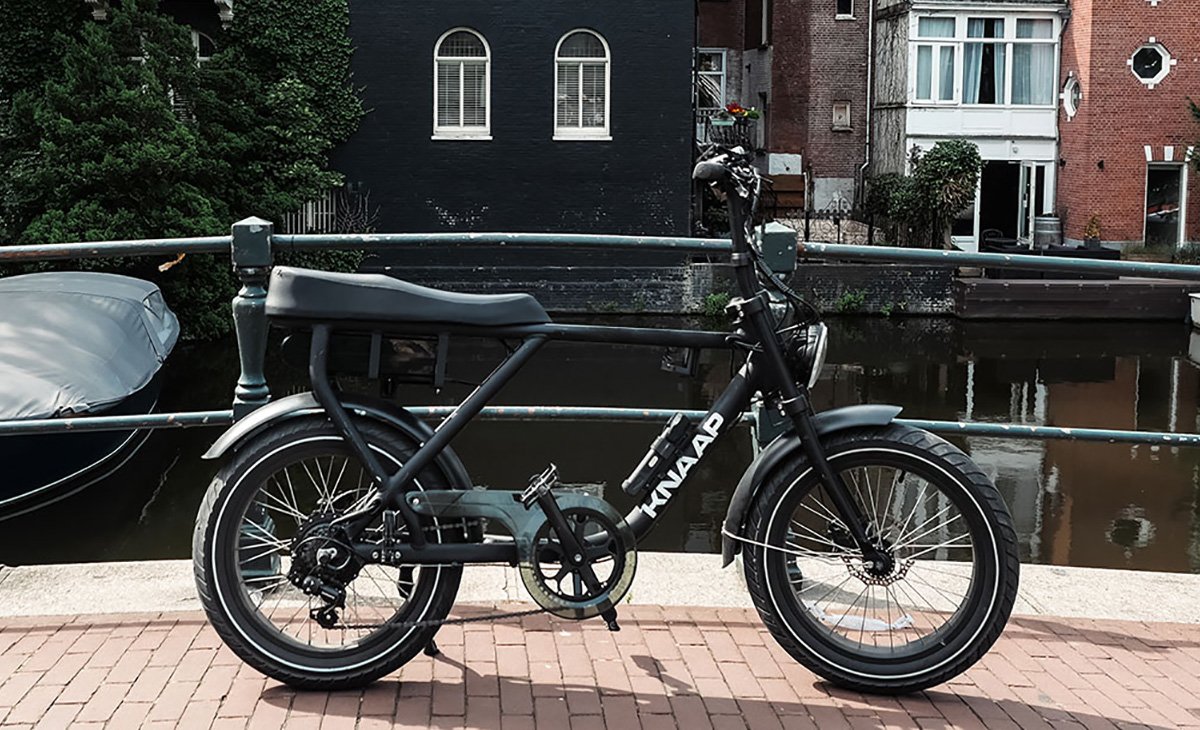 It does come down to personal preferences and I certainly won’t fault anyone who may think differently. It made my list of the Top Ten Bikes in Amsterdam in 2021. Will it stay there? Well stay tuned to find out. Nonetheless, there is little doubt that the Knaap will remain a distinctive ride among the bikes of Amsterdam.

The Top Ten Bikes In Amsterdam